In this article, an experienced engineer details his non-linear journey to becoming a note investor. He also lays out what note investing is and how you can profit from real estate investing’s ugly duckling.

MY JOURNEY TO NOTES

The year was 2014. It was a period of great personal frustration as I was just getting out of a marriage and had started a new engineering job that was unfulfilling on multiple levels, particularly my compensation. At age 40, I seriously needed to reboot my life, but I did not have a real plan on how to get back on track.

Later that year, I was at a social gathering and started chatting with a stranger. As it turned out, she was a former employee of my current company. While there, she too felt unfulfilled by her day job, leading her to become a real estate agent. She later quit that corporate job to become a full-time agent and real estate investor. I had mentioned my frustrations, and she asked me if I had considered becoming a real estate investor. I was a bit incredulous at the question: I had little in the way of savings or assets at that time, and believed investors had to be at least somewhat well off. She assured me that plenty of investors started with no money out of pocket. Intrigued, I began feverishly researching RE investing, what it would take to get started, and where I could go locally to find out more information. If nothing else, I needed a hobby or something outside of my 9-5 to make me feel more whole as a person.

In 2015, I began checking out some of the local real estate investing clubs. I felt the most at-home with one club in particular, LA South REIA, so I became a member. In addition to the monthly general meeting featuring guest speakers, this REIA offered three subgroups: Rehab, Multifamily, and Notes. I gravitated towards the Rehab group since flipping was all the rage in 2015. Property values were on the upswing and one could make healthy profits wholesaling or flipping properties. On TV, there were at least 3 different flipping shows on the air at that time. Nationally known rehabbers were hosting packed weekend seminars at Southern California hotels and convention centers. “We will buy your ugly home” bandit signs and billboards were everywhere.

For about a year and some change, I was basically a bird dog – a person who (for a commission) sought suitable properties for my subgroup leader, an active flipper. He had a standing deal with subgroup members that if any of us could find a deal that hit his desired profit numbers, we would joint venture and share the profits upon re-sale. I did manage to get some properties under contract but for one reason or another I could not close those deals. Unfortunately, no deals meant no flips, and no flips meant I was no closer to solving my financial woes.

Despite my lack of success on the rehabbing front, I was still determined to do a real estate deal, hell or high water. I was not much interested in the multifamily subgroup as I knew I would have even less success in that realm. So I started checking out the note subgroup meetings. Now, I did not know what a note was, let alone how to invest in one. But note investing (and the way it was taught by the subgroup leader) captured my interest for several reasons:

Finally, I had my “aha!” moment with real estate investing. I decided to take a workshop about note investing in early ’16, and started Terreva Investments, LLC for the express purpose of buying and selling distressed mortgage notes. I bought my first asset not long after that and haven’t looked back since!!!

They are actually promissory notes, which are written promises by a person or business to pay a debt over time. The note includes the amount owed, the interest rate, the term length (usually in months), the monthly payment, and when the payment is due every month. 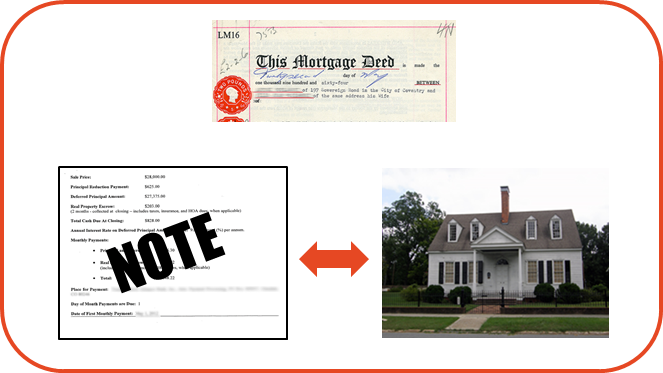 Notes can be used for any type of debt - credit cards, auto loans, school loans, etc. Mortgage notes naturally apply to real estate debt. Mortgages are not notes but actually secure promissory notes to real estate. That way, if the borrower can no longer make payments or refuses to make payments, the mortgage (or deed of trust) can be used by the lender to take over the real estate collateral to settle the unpaid debt.

HOW DO YOU INVEST IN MORTGAGE NOTES?

How one invests in notes depends on the type of notes they prefer. Let’s define the 3 major types:

Referring to Figure 2, notes are originated by banks and financial institutions to businesses and individuals for all sorts of purposes but here it is for the purpose of acquiring real estate. As long as the buyer keeps making his or her monthly payments, the note is considered performing, and that bank likely holds on to that note until paid in full. However, non-performing notes are often bundled by the banks and sold on the secondary market – where the biggest players are the government sponsored entities Fannie Mae and Freddie Mac and large hedge funds. Note investors, ranging from mom-and-pop shops like myself to large investment funds, can purchase the notes that these players make available on the secondary market. Once the purchase has been made, the note investor steps into the position of the originating bank and has the power to collect the debt that was owed.

The true power of note investing is that investors can purchase collateralized assets at a discount with a high yield, while avoiding day-to-day Wall Street volatility.  To be clear, to buy a note is to buy the debt, not the actual property itself. Here are two examples of note investments using real numbers.

Example 1: Let’s say that I purchase a PERFORMING 1st position note on a home in Georgia for $85K. It has an unpaid balance of $100K and 17 years left on the note, and let’s also assume that the monthly payment (that I will now receive from the borrower) is $1,000 per month. Over this time, I will have collected a total of $204K, and my gross yield will be 12.4%. Let’s put this in a different context so it is easier to understand.  If I had bought this note using dollars from an old, stagnant 401(k) account for $85,000, I would have $204,000 (less expenses) after 17 years assuming that the note was paid in full.

Example 2: Let’s say that Jacqueline purchases an $80K NON-PERFORMING 1st position note on Chris’s home in Ohio for $40K (see Figure 2). It is worth $75K as-is, $125K after rehabbing the home. The borrower has not paid in 4 years and he has abandoned the property. In order for Jacqueline to get her investment back, she will have to take possession of the property. That is, she will either have to convince Chris to sign over the property through a deed-in-lieu or she would have to foreclose on the property. In Ohio, that can take at least 8 months and cost about $3K in legal fees. Once the investor takes possession of the property, she can quickly re-sell it to a rehabber for the $32K (74% return) gross profit. If she spends $30K to rehab the house himself, he will net $52K (71% return) in profits.

WHAT ARE THE ADVANTAGES WHEN COMPARED TO OTHER STRATEGIES?

Here are a few reasons why I LOVE note investing:

WHAT ARE THE POTENTIAL GOTCHAS?

Note investing may not appeal to all real estate investors. Here are a few potential reasons why:

When buying a rental home, there are not many different ways to make money. Either one must rent it out or put it on the market to sell. Same goes with purchasing a home to flip. You pretty much need to rehab and re-sell the home to recoup your investment quickly. However, there are lots of different ways (or exit strategies) to make money in mortgage notes. Because notes are bought at a discount, investors have more flexibility in what they are able to do:

Although mortgage note investing is not new, it is lesser known to the general public when compared to other real estate investing strategies. Note investors do not have TV shows on HGTV. The mundane tasks that note investors have to undertake – working with servicing companies and lawyers, performing desktop due diligence, and going through Excel spreadsheets - do not make for exciting TV. But there is a reason why there are always a few skyscrapers in each city with a bank’s name on them. Or why banks are given a lot of deference by the government during times of economic turmoil. It’s because they make tons of money, due in part to notes of all kinds that they originate and service. And that money keeps the economy moving along.

The way I see it, mortgage notes give RE investors a chance to make significant income without having to deal with toilets, trash, and tenants. This should be an important consideration given this current climate of pandemics and rent control. Mortgage notes are treating me well. In three years, I have used my notes to triple the value of my self-directed IRA account. This in turn has given me capital to purchase larger value notes on higher quality assets. I will be honest and say that if you are looking for a sexy, get-rich-quick scheme, this strategy will disappoint you. But I encourage all to do your own due diligence and find out if note investing is a suitable strategy for you to build generational wealth. BE THE BANK!